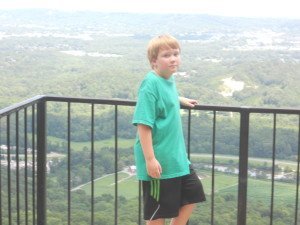 Our son has always suffered from seasonal allergies. Two years ago, he began
complaining of daily stomachaches. His pediatrician diagnosed him with IBS and
told us to take a Prevacid every day. Months went by, then a year, and the pain
continued accompanied by constant diarrhea. His pediatrician said to keep
taking the Prevacid. I insisted that we do something, so she referred us to a Gastroenterologist at Scottish Rite. They told us that IF there was anything wrong with him, a Prevacid a day FOREVER would take care of it. By now, two years had gone by and I did not know where to turn. He would cry every morning after eating breakfast from the pain. They kept giving him drugs for the symptom but never tried to find the cause. We had almost given up hope when we met Dr. Rob.

After being under Dr. Rob’s care and taking his supplements, he has no pain. His digestion is normal and as an added bonus, he has not suffered from seasonal allergies since his treatment began. Finding Alternacare improved the lives of all my family. He feels great and we are so relieved. It changed our whole outlook on the medical profession.

Dr. Rob and the entire staff are wonderful!